Stonehenge, a place which has always fascinated me. Perhaps it's the Celt in me, but this place stood before my people had arrived in those Sceptered Isles. There is evidence of human habitation in the area of the standing stones from as early as 8000 BC. Yes, over 10,000 years ago.

Who raised those stones? Why?


Stonehenge was produced by a culture that left no written records. Many aspects of Stonehenge, such as how it was built and which purposes it was used for, remain subject to debate. A number of myths surround the stones. The site, specifically the great trilithon, the encompassing horseshoe arrangement of the five central trilithons, the heel stone, and the embanked avenue, are aligned to the sunset of the winter solstice and the opposing sunrise of the summer solstice. A natural landform at the monument's location followed this line, and may have inspired its construction. The excavated remains of culled animal bones suggest that people may have gathered at the site for the winter rather than the summer. Further astronomical associations, and the precise astronomical significance of the site for its people, are a matter of speculation and debate. (Source)

I'm nearly finished with an interesting, and most entertaining, fictional account of how and why Stonehenge was built. Bernard Cornwell's work never fails to entertain.

I'm quite sure the stones were raised in paean to the gods of the ancients. Humankind has ever sensed a presence in the Universe far greater than ourselves.

I'm sure the Sassenachs thought of tearing down this ancient monument. Our own modern barbarians would, no doubt, approve. Yet it still stands, mute witness to the passage of time.

A bit of Jethro Tull seems in order. My brain is mush, need a vacation.

May I make my fond excuses
for the lateness of the hour,
but we accept your invitation, and we bring you Beltane's flower.
For the May Day is the great day, sung along the old straight track.
And those who ancient lines did ley
will heed the song that calls them back.
Pass the word and pass the lady, pass the plate to all who hunger.
Pass the wit of ancient wisdom, pass the cup of crimson wonder.

Ask the green man where he comes from, ask the cup that fills with red.
Ask the old grey standing stones that show the sun its way to bed.
Question all as to their ways,
and learn the secrets that they hold.
Walk the lines of nature's palm
crossed with silver and with gold.
Pass the cup and pass the lady, pass the plate to all who hunger.
Pass the wit of ancient wisdom, pass the cup of crimson wonder.

Join in black December's sadness,
lie in August's welcome corn.
Stir the cup that's ever-filling
with the blood of all that's born.
But the May Day is the great day, sung along the old straight track.
And those who ancient lines did lay
will heed this song that calls them back.
Pass the word and pass the lady, pass the plate to all who hunger.
Pass the wit of ancient wisdom, pass the cup of crimson wonder.

Word has it that these two little ladies will be paying us a visit for Thanksgiving... 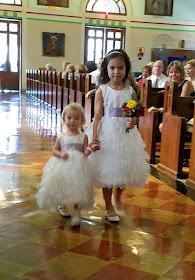 
The junior and senior granddaughters were at their Uncle's wedding earlier in September. The youngest was supposed to be the flower girl. I understand she declined the honor, vehemently. Big sis volunteered to walk with her. Ah, to be young again...
OldAFSarge at 4:00 AM
Share