Who They Are, Part VIII - Two Thud Drivers and a Sandy, Vietnam 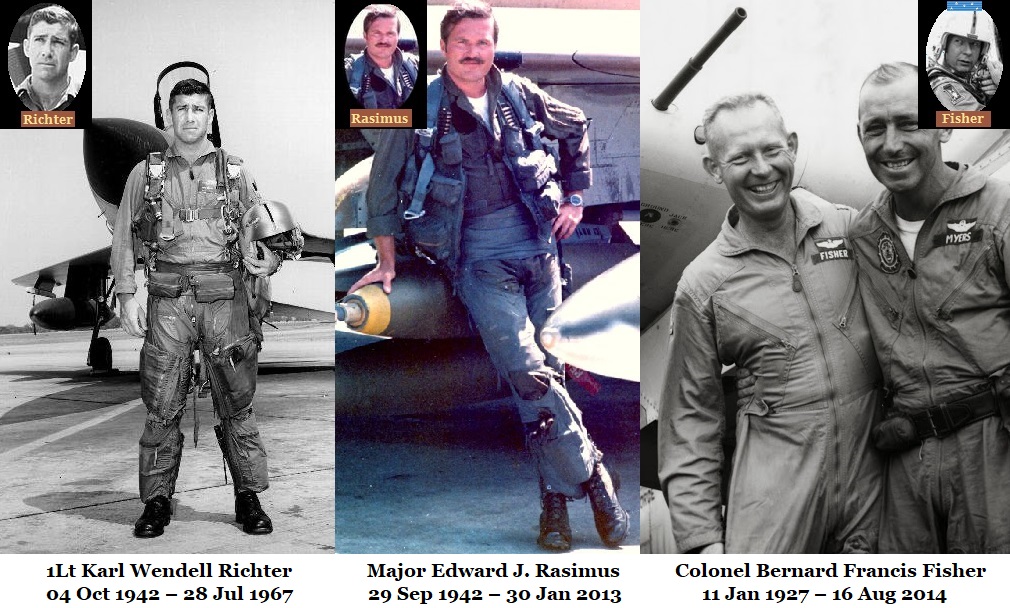 We've met these men before, 1Lt Richter (briefly) here, Major Rasimus here, and Colonel Fisher here. Before I begin, let me just say that Major Rasimus, Ras as he was known to his friends, was special. Juvat flew with him, my buddy Murph knew him and went to his funeral, I have visited his grave and paid my respects. (Threw a nickel on the grass I did.)

Ras flew over 250 combat missions in Vietnam, the bulk of them in the F-105D "Thud" but he did another tour in the F-4E Phantom as well. Ras was a published author as well, he wrote of his experiences in Vietnam and he also helped write the memoirs of Brigadier General Robin Olds, Fighter Pilot. (If you have any interest at all in flying fighters and leadership, real leadership, read that book.) Ras was a blogger as well, I found Thunder Tales after his passing. Damn, but that day was dusty.

Around here, Ras is considered family. He's in this video, he's one of the three lieutenants taxiing in after their 100th mission "Up North." (He's the one who launches the champagne cork from the cockpit, calling out "FOD."

Now it surprised me that I had mentioned 1Lt Karl Richter in that post linked to earlier, and that's all it was, a mention. While I did put him up there on the masthead, I apparently never got around to posting anything further. Let's rectify that, shall we?

Lieutenant Richter quickly became an exceptional fighter pilot, and took on every opportunity to fly. With only two years' Air Force experience and even less in combat, he became an element leader. Once, while on leave, he turned down the possibility of a trip to Bangkok or Hong Kong and went instead to Nakhon Phanom where he flew combat missions in an O-1E Bird Dog.

On September 21, 1966, Richter was flying as Ford 03, an element leader, north of Haiphong on a mission to seek out SAM sites. Preparing to strike a discovered site, he saw two MiG-17s making a pass. After assessing the situation, began closing in on the enemy aircraft. He engaged the MiG with his 20mm cannon and impacted the enemy aircraft.

Just as Richter's gun went empty, the MiG's wing broke off and he saw the MiG pilot eject. In a later comment, Richter noted "...It's strange, but, in a way, I was happy he got a good chute. I guess that's the thought that runs through all our minds. He's a jock like I am, flying for the enemy of course, but he's flying a plane, doing a job he has to do."

At the age of 23, Karl Richter had become the youngest American pilot to shoot down a MiG over Vietnam. Richter went to Saigon to receive the personal congratulations of Lt. Gen. William W. Momyer, Seventh Air Force commander, and again at the personal invitation of Premier Nguyễn Cao Kỳ when he was awarded the Vietnamese Distinguished Service Medal.

As he approached the 100-mission mark, Lieutenant Richter asked permission to fly a second 100 missions, believing his combat experience should be used to advance the war effort. On April 20, 1967, while leading a defense-suppression flight of F-105s, his flight destroyed or pinned down a number of enemy AAA and SAM crews, enabling the strike force to eliminate an important railroad target, in spite of intense enemy fire and weather that hindered navigation. Having already received the Silver Star, was awarded the Air Force Cross for his skill and heroism that day.

At the time of his death, Lt. Karl Richter had flown more missions over North Vietnam than any other airman—198 in all officially credited.


Flying with a new pilot, Richter spotted a bridge and instructed the trainee to stay above and watch as he rolled his F-105 toward the target. Suddenly, enemy anti-aircraft artillery opened up hitting the plane and forcing him to eject. His parachute disappeared into the fog bank and cloud cover. A nearby rescue helicopter picked up his beeper signal and homed in to get the downed pilot. Severely injured during his descent, most likely from swinging into the side of a sandstone cliff, Richter died en route to a hospital.

An Air Force Cross, the Silver Star, four Distinguished Flying Crosses with "V,"  for valor, and the Bronze Star, also with "V." All by the age of 24.

I note that 1Lt Richter's great nephew followed in his footsteps and became a Naval Aviator, flying the F/A-18 out of NAS Oceana. Later that same great nephew went on to become a Physician's Assistant with the Air Force. A very accomplished young man, did his great uncle proud I think. 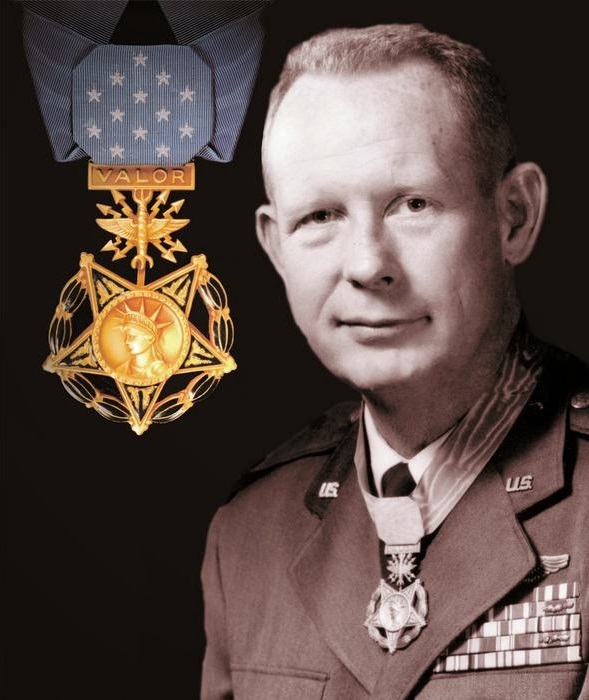 For conspicuous gallantry and intrepidity at the risk of his life above and beyond the call of duty. On that date, the special forces camp at A Shau was under attack by 2,000 North Vietnamese Army regulars. Hostile troops had positioned themselves between the airstrip and the camp. Other hostile troops had surrounded the camp and were continuously raking it with automatic weapons fire from the surrounding hills. The tops of the 1,500-foot hills were obscured by an 800 foot ceiling, limiting aircraft maneuverability and forcing pilots to operate within range of hostile gun positions, which often were able to fire down on the attacking aircraft. During the battle, Maj. Fisher observed a fellow airman crash land on the battle-torn airstrip. In the belief that the downed pilot was seriously injured and in imminent danger of capture, Maj. Fisher announced his intention to land on the airstrip to effect a rescue. Although aware of the extreme danger and likely failure of such an attempt, he elected to continue. Directing his own air cover, he landed his aircraft and taxied almost the full length of the runway, which was littered with battle debris and parts of an exploded aircraft. While effecting a successful rescue of the downed pilot, heavy ground fire was observed, with 19 bullets striking his aircraft. In the face of the withering ground fire, he applied power and gained enough speed to lift-off at the overrun of the airstrip. Maj. Fisher's profound concern for his fellow airman, and at the risk of his life above and beyond the call of duty are in the highest traditions of the U.S. Air Force and reflect great credit upon himself and the Armed Forces of his country.


Skyraiders were also used by Air Force Special Operations Command for search and rescue air cover. They were also used by the USAF to perform one of the Skyraider's most famous roles — the "Sandy" helicopter escort on combat rescues. On 10 March 1966, USAF Major Bernard F. Fisher flew an A-1E mission and was awarded the Medal of Honor for rescuing Major "Jump" Myers at A Shau Special Forces Camp. USAF Colonel William A. Jones III piloted an A-1H on 1 September 1968 mission for which he was awarded the Medal of Honor. In that mission, despite damage to his aircraft and suffering serious burns, he returned to his base and reported the position of a downed U.S. airman. (Source)