Well....we have officially entered the "Present Continuous" phase of the verb "Move".  How I long for the day when we enter the "Preterite" phase.  But, within the current phase of "moving" we are in the subphase of packing and purging.  Amazing how much "Stuff" we are discovering in hidey holes throughout the house. Stuff being the Swahili word for "worthless junk that upon procuring was thought to be wonderful, worthwhile and wanted, but which actually was none of the above".

My current modus operandi for dealing with stuff, is to assess when its container was last seen by a human being.  Based on that assessment, the second step in the "dealing" process is to go through it completely to determine if there is actually anything of value.  Step 3a (no value) is to place said stuff in large garbage bag and when bag is full place said bag in back of truck.  When back of truck is full, ruthlessly drive truck to dumpster and deposit bags therein.  Step 3b (value).  Confirm analysis with Mrs J.  Based on her more accurate and ruthless assessment of value either revert assessment to 3a and execute remainder of that process or place object in a moving box, adding it to the inventory list, and execute remainder of Step 3b.

Needless to say, I've been to the dumpster a lot recently.  The trash man comes every Wednesday.  I give the neighbors Thursday and Friday to offload their stuff.  Then we start in again.

But, and just to add "Awwww" factor to this post, I did find a book with a considerable bit of value yesterday.  It was in a box that we'd moved here after my Dad passed away.  Hadn't opened the box since.  Too hard immediately thereafter, forgotten about in the storage area as more time passed.  But, inside the box was my parent's first photo album with pictures of their marriage, first assignment together (Okinawa) and their first child.

I think the combined age of the three people in that picture is 46.  I don't see Dad's wings on his Class A's, but it might be the camera angle.  I was born at Hamilton AFB which had F-86's at the time, so I know he was rated.

So, yeah, step 3b was ruled and the album moved along with 2 others in that box to the "Keep for posterity" box.  Christmas should be fun this year.  Assuming, Little J and LJW get to come home.

Purging will continue as the actual time of changing verb tense gets closer.

Which brings us to the Status of El castillo nuevo Juvat.  The final walk through went pretty well.  The vent problem is corrected.  All that remains on the punch list is for the painters to come and touch up the paint.

However, during the walk through a misunderstanding was brought to light. I had interpreted the term "electrical equipment closet" to be a closet for the tv and network connections to be housed and the switch that managed them.  And that would be where all the network and tv cables would be routed.

Not so fast, there juvat!

Nope.  During the final walk through, we (I) went into the attic for the first time.  And saw this. 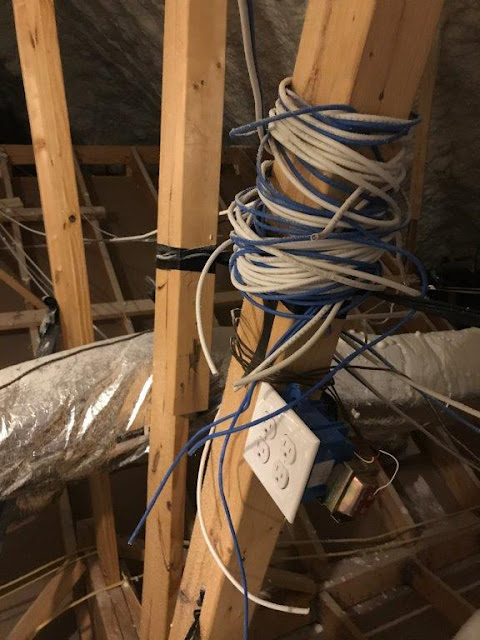 These are the ends of all the wires connected to the network boxes in each room.  And the switch that will control them will need to be here.  In the attic.  We all know that electronic equipment LOVES to be in warm spaces don't we?

But...I assumed  and we all know about that word don't we?

So, my network tester and I will soon begin deciphering that tangled web and marking both ends of each cable.  Then adding a cable connector to the ones I actually need and figuring out how to get it back across the house to the vicinity of what will be converted from an electrical equipment closet to an actual (air conditioned) Network closet.

But, it should keep me off the streets at nights.

On our daily walks (the long way round up to  El castillo nuevo Juvat), Mrs J and I noticed that, lately, the grass in the horse pasture was unusually green.  We had recently added sprinklers and been watering in the area, so had patted ourselves on the back for being foresighted.

By now, you know this is going to end badly don't you?

Then one morning this week, I noticed some bright green stuff on the top of the horse trough, so I decided to go take a closer look.  About 20 yards away, I noticed that the ground was decidedly damp.  A Rhode Islander might even call it Muddy, but...whadda they know?

Pressing on, I arrived at the trough and saw that the Float Valve was no longer floating, hence water was running.  Given the hard water in the area, it's not unusual for the float valve to give up the ghost after a year or two.  So, off to Tractor Supply I go and pick up another valve.

Step carefully back up to the trough and am attempting to remove the existing valve when I get a lot of help. 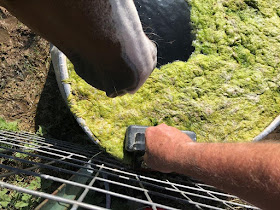 "Whacha' doin, Dad?  Can I help?"  Then Merlot proceeds to try to take a nip out of my forearm. 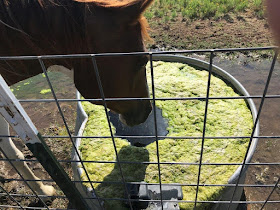 I withdrew from immediate range as I thought she just wanted a peaceful drink.

No.  Very shortly after the above shot was taken, I was very wet and covered in that wonderful algae thing.

I was not a happy camper.  Went up to the barn, put a little hay in their stalls, then locked them in.  Went back down to the trough, R&R'd the float valve, scooped out the algae, added  anti-algae stuff and turned the water back on.

I then let them out of their stalls.  Merlot was dancing around, bucking and farting and just having a great ol' time laughing at me.  Cabernet, just looked at me with that "Face it, Dad, you f'd up, you trusted her" look as she walked over to the trough and took a drink.

So, all in all, a pretty normal week here at Rancho Juvat.  Hope yours was also.

I do have one parting riddle for you though.  If we have to wear masks because we might infect someone even though we don't exhibit any symptoms whatsoever, when will circumstance  ever exist for us non-symptomatic folks to be able to not wear a mask?