And I mean it...Yesterday was CBW day! I know that for an absolute fact.  Today is CBW+1 or ABC day. (Beans, CBW+1 is the day I Answer Blog Comments.  Therefore....)  I was mostly kidding a couple of weeks ago when I talked about being worried about keeping track of Days of the Week because I use Sunday as my Anchor Day.  I go to Church and write my Blog Post, then count the days since that occurred.  When CBW=7 then CBW=0.

Easy Peasy.  Until I did it for 10 days straight.  Seriously, I ended up putting an X on the fridge calendar before I went to bed just to keep track of days of the week..

I have no clue how Sarge and other daily bloggers do it.  But, I'm glad they can pull it off.
In any case, on with our regularly scheduled broadcast.
Any Questions?
juvat, what's the status of the Water Softener Camouflage project?
Well...One cabin is complete and has been for a month or so.

That cabin was comparatively easy.  Had a three walled place for the equipment already part of the cabin.  However, the second cabin is a bit trickier 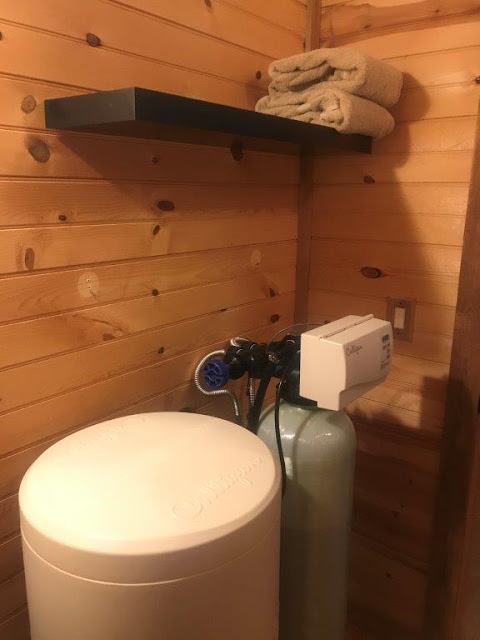 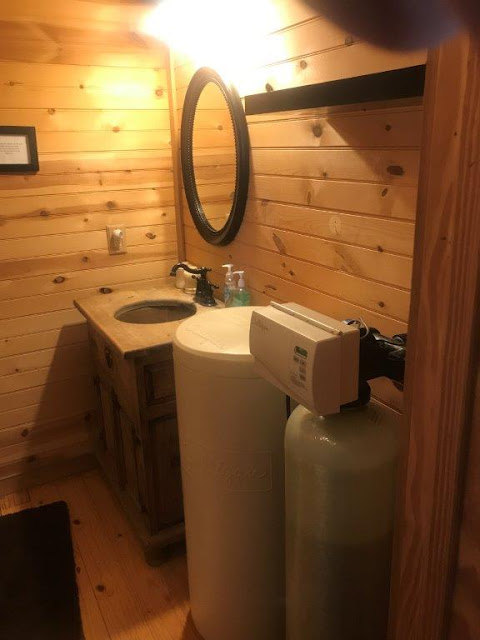 I've got to build walls around two of the sides, a cover on top and leave access to the light switch.  Doable...I hope, but gonna take quite a bit more time.  The good news/bad news is, up to this point, the occupancy rate is above 80% of the days per month. So haven't had enough time to start and finish this project, but the income is...nice!  This week we had guest's check out yesterday and no one will check in until Friday.
So...with a little bit of luck, it'll be done in time.  The plan is to put two 2x4 braces horizontally across the front of the containers, anchoring them on the side of the sink and the wall with the switch.  Cedar planks will go vertically across the front from floor to just above the equipment.  On the sink side, another 2x4 will go from back to front and serve as an anchor for staves that shut off that side.  A similar solution will be done on the light switch side.  The front staves on that end will be cut off at sink height.  a permanent top will be put on that section and will serve as towel storage, maybe.  Directly above the now enclosed on three sides equipment will be a removable top for servicing equipment and replacing salt.
We'll see how it goes.
Any other interesting events happening around Rancho Juvat there, juvat?
Well.  the other cabin will be taken off the short term rental market mid-July.  Seems that my second Grand Daughter and her Mother will be arriving from HK and will be staying with us for a few months.  Youngest Grand Daughter is expected to make her first public appearance the last few days of October which will now be officially referred to as Fall Birth Day Week.  Little J will return here a week or two prior to the due date.  The family will be together until after the New Year when Youngest Grand Daughter is old enough to fly and their accrued leave runs out. (Yes, Beans, they have a lot of accrued leave.  An extended solo assignment in Kuwait with no travel permitted (WuFlu don't you know) tends to accumulate a lot of leave.)
Why do you refer to it as Fall Birth Day Week, juvat?
Well, Mrs. J's birthday is that week, as is MG's (current Grand Daughter) and now Youngest Grand Daughter's will all be in the same week.  My Birthday, Little Juvat's Birthday and MBD's Birthday all are in the first week in June.  That has traditionally been referred to as "THE Birthday week".  Clearly, that has been overcome by events, so as the official naming Patriarch of the Family, I am now renaming it '"Summer Birth Day Week".
(After running it by all concerned...of course.)
And.....Just because I can.
Hard to believe it's been 8 months already.  I don't know who's aging faster.  Her or me?   Her probably, I just look like I am. Heck, if you ask my ego, I'm 21 and holding.
That WAS where I was ending this post, but, not so fast! Late Breaking news.  Had to head to town for a few necessities  and while at the grocery store (HEB...Rated #2 grocery chain in the Nation AND it's only located in Texas! Whoop!), made my usual trip down the baby food aisle.
No, Beans, I'm not at that point in my life...yet.
MBD had very early on noted the potential impact the supply chain interruptions might have on newborn stuff in a large college aged population city (i.e. College Station). With that in mind, she had asked us to check baby formula aisle every time we went.
We have...frequently...with no success. I'd like to thank that person in the White House for his astute leadership and economic skills.
Today? 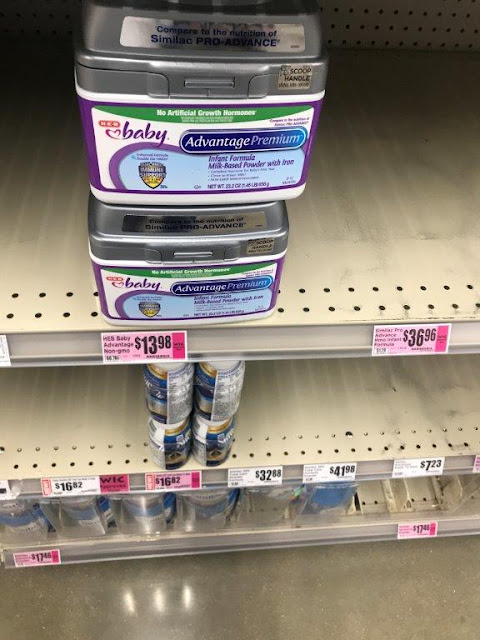 Notice the empty shelves....However....
A quick phone call to confirm make and model and.... 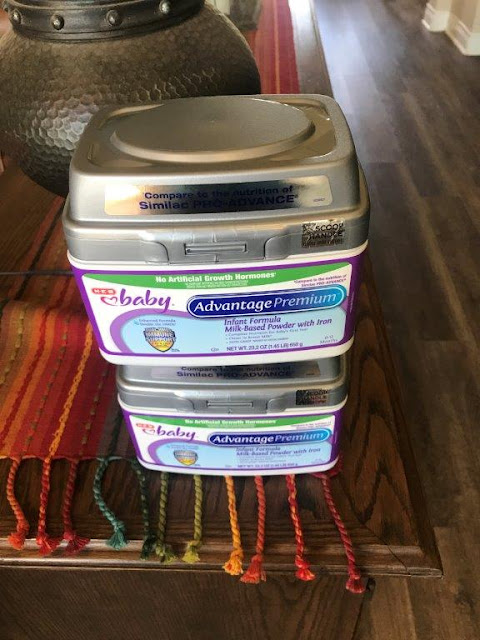 Scored the max we could (2) and now need to make delivery arrangements.  As Baron Von Richthofen once said "I'd rather be lucky than good.  Luck is more reliable."1
Peace Out, Y'all!
1. Not sure, really, who said it first.  Might even have been me.  But...attributing it to the Red Baron makes it more credible. Just sayin'
juvat at 4:00 AM
Share