When you are surrounded by Heroes...It is damned difficult to not perform like one! * 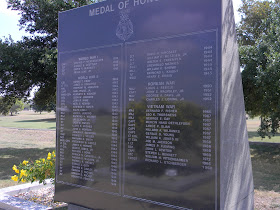 Turns out there are 4 correct answers.  In order, they are:

Having been through Luke AFB twice for RTU, I'm familiar with Lt. Luke's story.  I will write a post about him at some point in time.  A1C Pitsenbarger's story can be read here, and IMHO, the Airman is a very worthy recipient.  Major Fisher will also be covered in some future post.  Today, we'll be learning more about Major Louis J. Sebille.

Up until deciding on which name on this monument to talk about this week, I had little knowledge about Major Sebille.  His name rang a small bell in that while assigned to the 18TFW at Kadena, I'd lived in Sebille Manor, a section of housing there.  As far as I know, there was no monument or other information about the man or why the area was named for him.

As it turns out, I was pretty much surrounded by aspects of the man.

Seems Major Sebille had seen action in WWII as a B-26 Pilot flying a total of 68 missions, receiving a pair of Distinguished Flying Crosses.  Between the wars, he had a short career as an airline pilot, but jumped at the change to return to the military, eventually becoming checked out in both the F-51 and the F-80 Shooting Star.


As a side note, I thought it interesting that the rest of his career he would fly the two aircraft interchangeably.  Jets and Propeller planes have entirely different flying characteristics, tendencies, quirks and vulnerabilities.  It must have been an interesting time to be a pilot.

When the Korean War kicks off in late June 1950, Major Sebille is assigned as the Commander of the 67th Fighter Bomber Squadron 18th Fighter Bomber Wing.  There's one of those Venn Circles closing in.  The Wing at Kadena was the 18TFW and the 67th TFS was a part of it.

As the early stages of the war go very badly for the UN forces, the ground forces are being forced back towards the coastal city of Pusan (now Busan).  Air Forces are conducting operations out of Japan as well as airfields around Taegu, Pusan and Kimhae.  The North Koreans have advanced all the way to the Naktong River which is the last major topographical barrier between them and the Tsushima Straits and winning the war.

On September 4th, 1950, the North Koreans manage to establish a beach head across the Naktong River and start to bring forces across for what they hope will be the final push.  This is spotted by a FAC and aircraft are vectored in to attack the breach.  Major Sebille is leading a three ship of F-51s loaded with Bombs, Rockets and Machine Guns.

Major Sebille begins the attack from about 5000' planning to drop both bombs on the first pass.  He hits the pickle button at about 2500' and begins a left hand pull to avoid the frag pattern.  (Later procedures would have a higher release and a level pull to avoid that pattern.) However during the delivery only one bomb releases.  The 500 lb bomb on the wing coupled with what probably is a 4g pull results in a 2000Lb imbalance on the wing.  Regaining control of the aircraft takes him even lower where he is hit by ground fire.  The aircraft is leaking coolant, which as any afficiado of Mustangs knows, is usually fatal to the aircraft as the engine will seize in short order.  In any case, he's advised to try to make an emergency landing at Taegu. 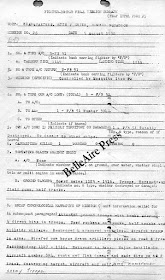 
Here's where the story starts breaking up.  The facts are that he radios back "No, I'll never make it.  I'm going back and get that bastard!"  He then turns around and rolls in again, firing all 6 rockets at the armored vehicles in the target convoy.  Once expended, he continues the dive while shooting his machine guns, ultimately crashing into the lead armored personnel carrier with the aircraft, destroying it.

Seems that after the action, some commanders felt that this was more of a kamikaze attack rather than a valorous action.  This post goes into greater detail and I think the author's final few paragraphs are interesting.  Essentially, he questions "who is the braver?", one who sacrifices his life during battle, or one who knows his limitations yet continually reenters combat in spite of them.

I have no idea what the answer is to that question.  My response probably would be "Both!".  Suffice it to say, I believe Major Sebille recognized the strategic importance of stopping the North Korean advance at the Naktong, right there, right then.  His ability to enhance that outcome could only be accomplished by continuing his attack and destroying his target, rather than retreating and attempting to return later.  I am not going to question that decision.  He made it, and paid the consequences.


Maj. Sebille, distinguished himself by conspicuous gallantry and intrepidity at the risk of his life above and beyond the call of duty. During an attack on a camouflaged area containing a concentration of enemy troops, artillery, and armored vehicles, Maj. Sebille's F-51 aircraft was severely damaged by antiaircraft fire. Although fully cognizant of the short period he could remain airborne, he deliberately ignored the possibility of survival by abandoning the aircraft or by crash landing, and continued his attack against the enemy forces threatening the security of friendly ground troops. In his determination to inflict maximum damage upon the enemy, Maj. Sebille again exposed himself to the intense fire of enemy gun batteries and dived on the target to his death. The superior leadership, daring, and selfless devotion to duty which he displayed in the execution of an extremely dangerous mission were an inspiration to both his subordinates and superiors and reflect the highest credit upon himself, the U.S. Air Force, and the armed forces of the United Nations.