Back in '75 I went riding. On horses. Twice. As both horses and myself survived the experience, and seeing as how RHT447 mentioned riding in his youth and Juvat has offered me the use of a horse when I get down to Texas (someday), it seems high time that I related my horse riding days. (All two of 'em.)

I was stationed in Denver for tech school, learning how to maintain the radar on the mighty F-4D Phantom (the C's radar was similar, I don't recall a C-model radar trainer in Denver, perhaps Russ does...)

That tech school was rather a long one, I arrived in June of '75 and departed in February of '76. The training wasn't exactly burdensome for those with the aptitude (which the Air Force said I had) and the school was at Lowry Air Force Base where the trainees were treated like human beings (for the most part) unlike some other Air Training Command (ATC) bases. Such as Keesler AFB in Mississippi, Chanute AFB in Illinois, and Sheppard AFB in Texas.

I've been to Keesler, as a Staff Sergeant, and yes, they treated the junior airmen like dirt. I never heard anything good about Chanute and heard many, many bad things about Sheppard (it's not the end of the world but you can see it from there, or is that Holloman, don't know, never been to either one.)

But yes, I digress, we're here to talk horses (sort of) not ATC shite-holes (Lowry was NOT on that list).

One fine day, our merry band of future WCS maintainers decided that going horse back riding would be just the thing on the coming weekend. Comprising that merry band were myself, Mike from Connecticut (who was the tallest Irishman I've ever seen), Manuel from Texas (who actually knew a thing or two about horses), and the two roommates, one of whom was from South Carolina and the other from Hawaii. Two different guys I've never seen as roomies but these two got along famously.

And I cannot, for the life of me, remember their names. But I can still see their faces these umpty-some-odd years later. As I need names for them I'll go with Reb (for obvious reasons and no that ain't the fella from Hawaii) and Puka, because he always wore one of these...

Now I don't recall who owned a motor vehicle in those days, it might have been Puka, or maybe it was Reb, but as the two were inseparable it didn't really matter. (Remind me some day to tell the tale of the Iranian Air Force contingent at Lowry back in those days. Their NCOs wore more crap on their uniforms than a Panamanian colonel. Seems that 20 of 'em would all chip in to buy the oldest still operable automobile they could find and then all 20 of 'em would pile in and demonstrate their complete lack of a) driving skills and b) even the most rudimentary rules of the road. Hhmm, okay, that was the whole story. So no need to remind me. And yes, big time digression...)

So the five of us piled into the Reb-Puka mobile and headed on out to one of the local stables where horses could be had by the hour. Unfortunately...

We all got a mount, but Mike was fairly nervous about the whole thing, being a city feller and all, so he expressed some concern that he might get a real mellow horse. Which the proprietor of the establishment said was not a problem. So Mike's ride was advertised as a "gentle old fellow, 16 years old and as mild as a day in spring."

The folks at the stable were a bit surprised that we wanted the horses for two hours and not the more standard one.

"Nope, we want 'em for two hours. Is that a problem?" Puka inquired.

"No sir, it's just that most folks rent 'em for an hour. My son'll ride with you but he needs to be back in an hour..."

"Say, you fellers are military right?"

"Yessir." we all echoed.

"Well, shucks, I don't reckon you boys will run off with my horses now will ya?"

"Heh, I like you boys, now git round to the back over yonder and my son will see ya down the trail."

And yes, I really countrified the proprietor's dialog a bit, he might not have actually talked like that. But yeah, I thought it sounded cool. YMMV.

So off to the stable where we acquired our mounts. Things went to shite damned near out the gate.

My horse didn't really want to go out on a ride that day, stubborn animal, so the proprietor's son kept flicking him with this switch he had. At one point my animal had had quite enough and tried to bite me!

Well, he got the sole of my boot alongside his equine muzzle as I pulled the reins in rather tightly. It was the horse or me, while he was a lot bigger, I was (arguably I suppose) a lot smarter. And I didn't really kick him, just pushed his nose to the front with some gusto.

I addressed myself to the horse thusly: "You dumb sumbitch, I didn't hit you with the effing switch it was the freaking kid!"

I addressed myself to the kid as well: "Hit my horse one more time you little shit and you'll be heading back to the stable with that switch up your..."

I'm sure you can figure out the rest. Bottom line was, the kid left my horse alone and rode off to deal with a real situation. (While my horse decided that it was, after all, a fine day for a turn around the grounds and please don't kick me again.)

That horse was galloping up and down the trail, totally lathered and snorting at each turn like a wild thing. And Mike was barely hanging on!

Yeah, kinda like that (only without the music), as Mike had never ridden before he was terrified. Yet,somehow he managed to hang on. The next day wasn't much fun, I had no idea a fella could bruise like that. (Inside his legs, his butt, dude was sore!)

Eventually Mike's ride calmed down (poor old guy was probably exhausted) and we approached the half-hour out point. The kid headed back and all of our horses decided to pack it in and head home.

Seems the horses always went out for an hour and they knew the halfway point very well.

We kind of milled around for a bit until I decided that seeing as how my mount wanted to circle back why we'd just cut a tight circle until one of us got tired of it. I had him reined in tight so that his nose was facing towards his tail. All he could do was walk in circles. Yes, he tired of it first. With a snort he consented to head further out.

The other horses had been watching all this (herd animals ya know, kinda like progressives only smarter) and when my ride decided he'd had enough circling, they all fell into line. An interesting five minutes.

Off we went. We crossed a small highway over to this big field, where I decided that it would be interesting to experience a gallop. Off came my kepi, which I waved in the air, and with a whoop we set off. I gave the old boy his head and damn did we have fun.

Kepi? What? Oh, one of these...
From my reenacting days and no, I don't have it anymore (I'm sure The Missus Herself "misplaced" it at some point in the last 38 years. But there's that Amazon link... Hhmm, perhaps I shall buy another? Don't tell her!)

Well, we got across the field in short order, the others came galloping up as well, hooting and hollering, Hell, Reb was so excited you could barely understand a word he was saying, something we'd never noticed before. At any rate, we all decided to dismount and cool our heels for a while. (Yes, Mike's horse galloped across the field as well, seems he'd decided that Mike no longer got a vote regarding the conditions of the ride.)

While relaxing I think it was Mike who asked why we always mounted a horse from the left side. No one really knew the answer. Well, Manuel might have but I don't recall him answering Mike's question because he started laughing right about then.

Seems that Puka had decided to try mounting his horse from the right. He had one foot in the stirrup and was hopping like mad trying to get on his horse who was constantly shifting away from him.

You haven't laughed until you've seen a Texan rolling on the ground laughing while pointing at a Hawaiian trying to get on his horse the wrong way. It was pretty hysterical.

Eventually we headed back and turned the horses in, they seemed glad to bid us farewell.

Damned humans, making them go out for two whole hours!

Let's just say that the second time I went riding (up in the mountains with a tour group) wasn't nearly as eventful as the first. A lot more relaxed and scenic though.

Here's how I pictured myself... 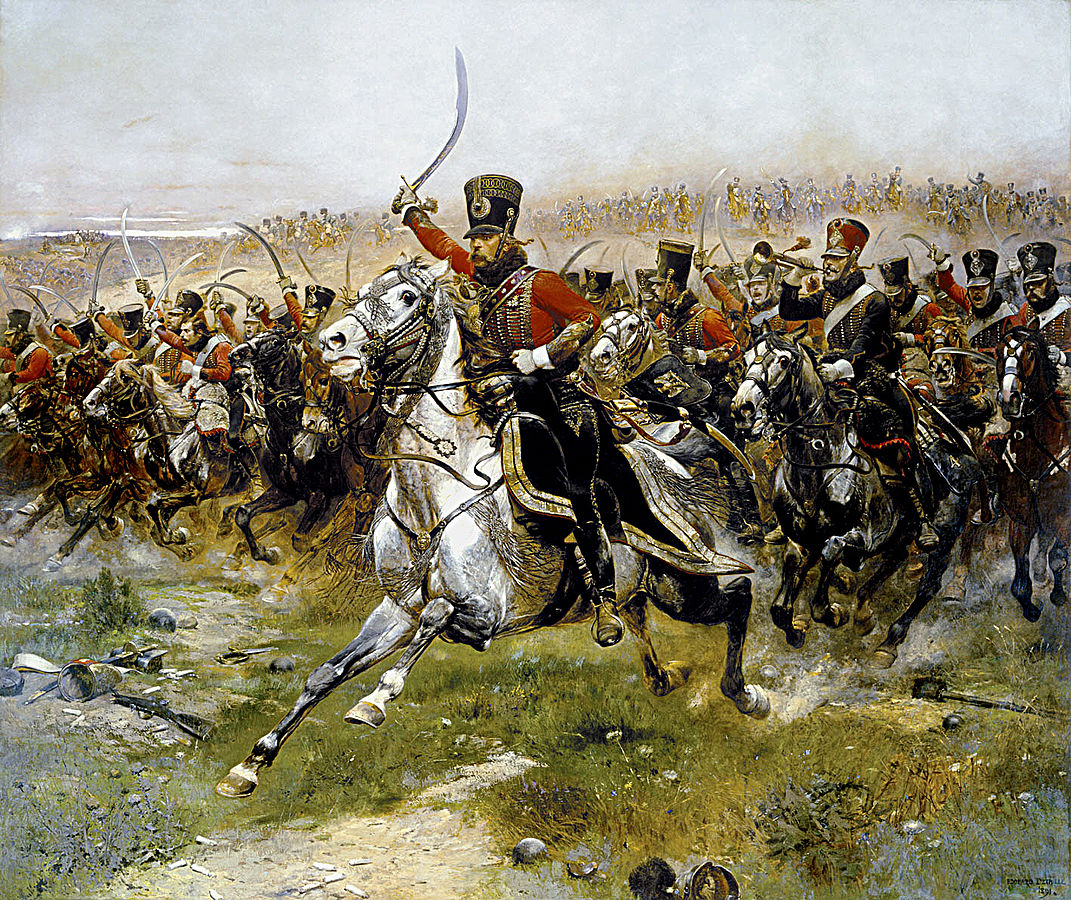 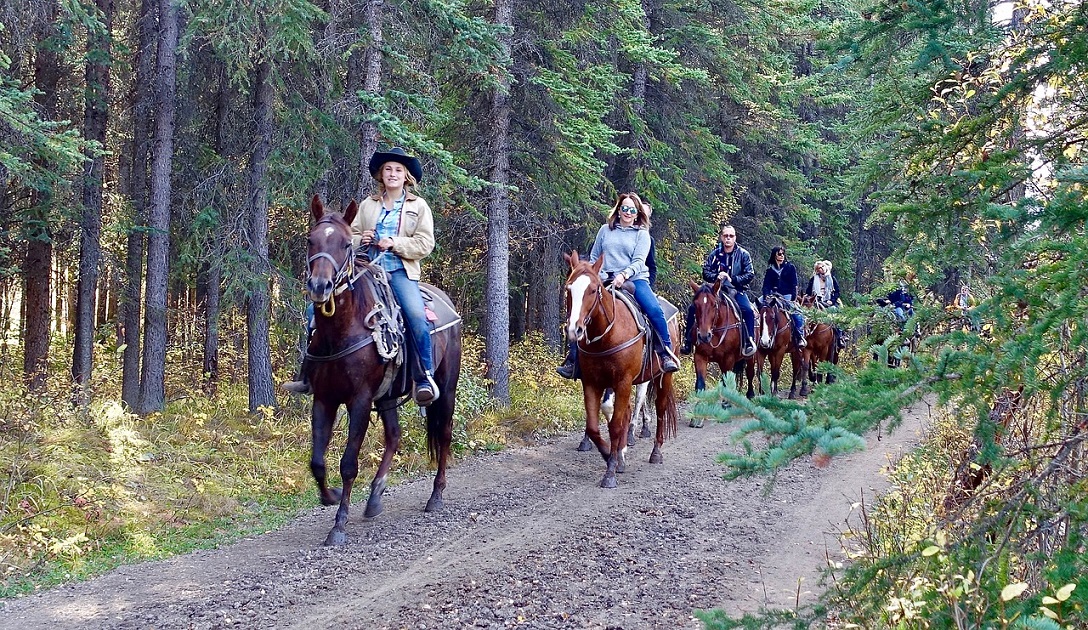 Hey! How about a bugle call?

Can anyone tell me the significance of this one?