Well...it has, indeed, been a great week for the Juvat Clan.

On the housing front, Monday through Wednesday saw the completion of the Road.  The Chip Seal bubbas showed up right on time Monday morning and did the prep work on the road base.  Because they'd dropped the price on the project, we were able to resurface the rest of our road to our guest house and current house. 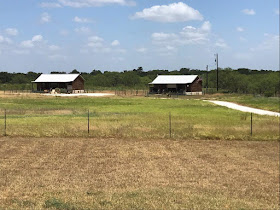 So, the prep work took all day.  Tuesday, they came back and put down the tar and gravel.  Wednesday was touch up and clean up.  As well as finishing out the parking spaces at the guest house, current house and new house.  Looks very nice and walking up to the barn is much easier on the knees on a paved road than on rocky base.

The painters came back to the house and did the touch up work.  The glass and mirror guy came and installed the mirrors and the shower glass.  Then the dirt guy came and added fill around the base of the house to help direct rain water away from it. Finally, the cleaning crew came and removed the protective floor covering, cleaned and polished the glass, and took away the construction debris. 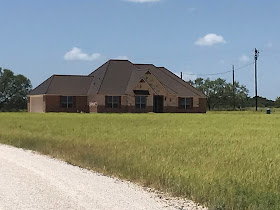 Around 9 AM this morning, Mrs J, the project supervisor and I will be doing the final walk through.  So, construction is "complete"...except for any punch list items.

Now,  Mrs J and I have already done our walk through and have noted several questions, observations and or concerns.  The Gas Stove and Fireplace light perfectly, but the electric stove doesn't appear to function. 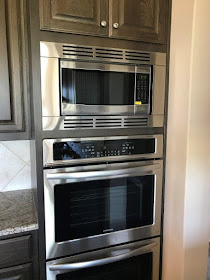 There's a big button that says "Start", but, and I could have my switchology wrong, pushing it by itself or in conjunction with several tries of other buttons, doesn't seem to do anything.  Things that make you go "HMMMMM".

We took a small electric fan with us and plugged it in to every socket in the house.  3 or 4 times the plug would not go in.  Couldn't see anything blocking it, but it didn't go in.

Update: The plugs are all on a GFCI circuit and the supervisor said that if the plug isn't perfectly aligned the first few times, it is difficult to insert.  Sure enough, trying again, loosened them up.

Yes, Beans, I tried turning it over so the wider end was on the other side, no change.

The kitchen vent needs some plaster work.  I'm pretty sure the hole in the ceiling is not supposed to show. 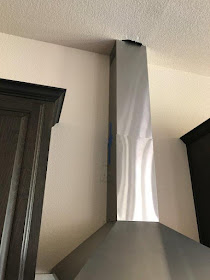 All that having been said.  It looks like it's time to start packing.  Mrs J is, in fact, doing just that while I'm writing this.  I've got papal dispensation from packing for as long as I'm writing this. 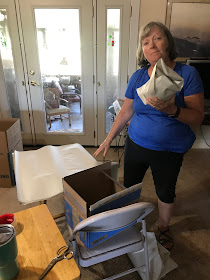 On the personal construction front, my latest project is complete.  Tuesday, we made a trip to Moscow on the Colorado to deliver MBD and SIL's anniversary present to them.  I was very grateful that I didn't have to make the trip to Detroit on the Bayou, as I don't really like driving in the fourth largest city in the States.  They were picking up some furniture that they had been storing at his parent's house, so win/win. 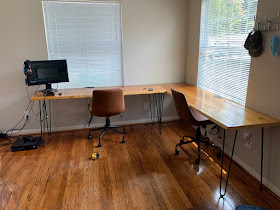 Now, all I have to do is clean the workshop of all the sawdust.  Piece of cake!  Next project?  Mrs J wants a Murphy Bed for my office.  (In case I'm in need of an emergency nap, Beans.  She's thoughtful like that.)

Finally, and THE reason it's a great week, Little J is back in Kuwait.  He's in quarantine in a house on the embassy compound.  LJW has to bring him meals and leave them on the porch, but the house evidently has a upstairs balcony overlooking the back yard.  I guess they'll have to settle for a Shakespearian Romeo and Juliet scene, at least for now.

There was some bureaucratic fol-de-rol about testing for viruses, but...whatever...He's at least within yards of his wife now rather than a couple of hundred miles. So, he's on admin leave while he quarantines.

How is he keeping himself sane (OK, attempting to keep...)?  Well, he's putting together a Christmas Light control kit.  You know the ones you see on YouTube where the lights flash and change colors in time to the music.

He had a boatload of Arduino parts delivered via Amazon and is going to be working on that project.  We Skyped with him and LJW (a 3 way call) earlier this week and happened to mention an idea I had about linking our new gate, existing gate and the lights and doorbell in our new house.  He called back this morning asking me to take a picture of the innards of our existing gates.

So...If all goes well, when Mrs J or I come on the property and push the button to open the gate, the lights in our new house will go on, garage door open and an electronic voice will announce our arrival.  (I wonder if I can get him to have it play "Pomp and Circumstance" or maybe "Hail to the Chief", that would do wonders for my ego.  Right????) If one of our guest's push the button, the front gate opens and the lights at their guest house come on.  Similarly, if my Sister does it, the lights at her place (our current home) will come on.

But...Anything to keep him from getting bored for the next week or so.

Hope all y'all had a great week also.  Peace out!

Oh and by the way, I found a link to this VERY interesting article about Pyramids at Chris Lynch's place recently.  The historian in you (and y'all know who "you" is) will be very  interested in it.