“A happy family is but an earlier heaven.” *

It's been a busy few weeks around Rancho Juvat, but busy is good.  "Idle hands...." doncha' know?

Unfortunately, they're coming to a close and Casa Juvat will be much quieter.  Little J and DIL will be departing our AOR tomorrow to travel to Sodom on the Potomac.  Not to do anything official, mind you, in fact they are prohibited from visiting the headquarters because the District is in lock down.  No, they're going to sit in a hotel room until their flight leaves on the 11th.  But, they can't remain here either because...rules!

YGBSM!  Gummint at its most brilliant.

But, it has been fun having them around.  The wine closet took a bit of a hit, but it was well spent. It did an excellent job of lubricating the tongue, reviving long forgotten memories and enhancing the stories thereof.  It is amazing what children remember about their childhood vs what their parents remember about it. 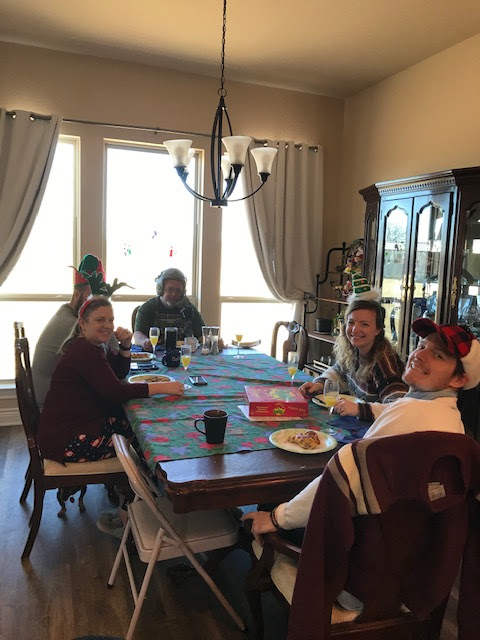 Mrs J and I had 5 "pods" of family visit over the past couple of weeks.  Mrs J and I being the first.  Second to arrive were Little J and DIL about 10 days prior to Christmas.  Third, was MBD and SIL and their dogs, Tallulah and Piper.

My sister, lives on our property, so she was around quite a bit, as the holidays shut down the HEB were she works. Finally, my Niece and her family arrived for a visit from Austin yesterday.  Clair is 4 and Wyatt is 2 1/2.  They fill in as my "grandkids" as I am their great uncle.

Great Uncle juvat...Has a certain ring to it.

They were wrapped up with their father's family over Christmas, but they managed to visit for a few hours yesterday.

I had forgotten how much energy a two year old has and how much gets sucked out of you.  But...It was a great time.  I particularly liked the reaction Wyatt had to the gift Santa left him.  A walking, roaring, teeth gnashing T-Rex.  His in-car entertainment device (a hot wheels car) promptly went into the T-Rex's mouth followed by peels of laughter from the little guy.

On the weather front, it's been in the high 60's low 70's until New Year's Eve when our first winter storm blew through.

Wind chill was in the teens and after about 2" of rain, it finally turned into some cold, white  stuff.  I vaguely remember it from Korea being called "Snow". 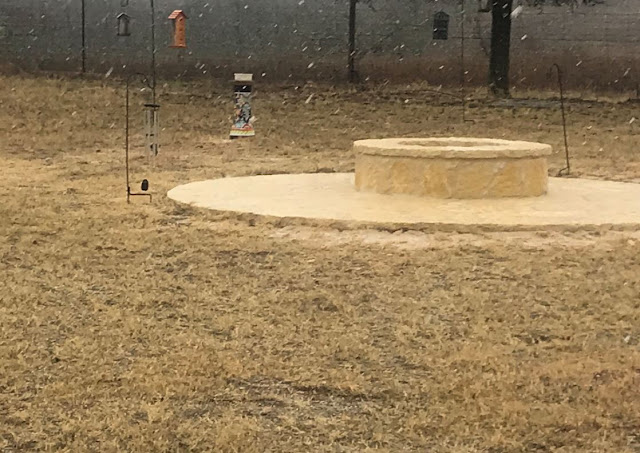 All I know about it is, it turns Texas Drivers into lunatics.  It's either 2 mph or 80 mph and frequently it's one car/truck cycling between the two limits at record pace.

We stayed on the property.  Even then things got exciting.  Walked to the barn to feed the horses.  Just enough snow on the ground to stick to my shoes, but not enough to notice.  Stepped on to the concrete floor of the tack room and did a fabulous imitation of Brian Boitano across the floor.  Fortunately, I avoided contact between my face and the floor with a strategic placement of my bottom on a nearby hay bale.  The Horses gave me an 8 for the pirouette.

The ground was too warm for the snow to remain very long, but that and the Rain did a bit of a number on the septic.  The construction foreman said it's just the topsoil compressing around it and is sending more dirt out today. 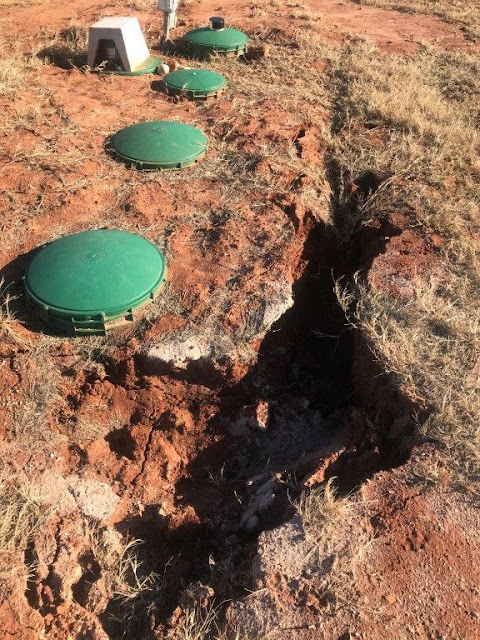 Made some progress on Operation "Everyone move one house clockwise".  The replacement flooring has been delivered and is now "acclimating" in our old house, soon to be my sister's new house.  Installation will begin next Monday and should take two weeks.  Once she moves in, phase 3 will begin, the renovation of her current cottage.  God willing and the creek don't rise, that will be complete before DIL returns in March with the Grand Dog "Tex".  Seems Hong Kong will put him in 6 month quarantine if he PCS's from Kuwait to Hong Kong.  However, if he PCS's from the US he's good to go from the start.

Once again, Gummint at its most brilliant (GAIMB? Sarge?)

Finally, I was scheduled to take my Stearman ride Saturday.  However...WX CNX.  Too cold and too windy.  So,  the flight will be rescheduled shortly, film to follow. Windy I understand.  Took me a second on the too cold.  It was about 35,  if the Stearman flew at 90 knots, the wind chill would make it about 14.  Given the standard temperature lapse rate of 3.5o F/1000', flying even a thousand feet above the ground would make it even cooler.  But not as cool as the Ardennes in 1944.  Which I'm sure we'll find out more about soon.

Hope all is well with all y'all. Never give up, never surrender!