It focuses on the Navy's already disorganized and perplexing acquisition program for their first carrier-based unmanned aircraft vehicle (UAV) or system (UAS.)  The X-47B was the topic of a post here last year, when the aircraft made Naval Aviation history by becoming the first UAS to successfully conduct launch and recovery operations aboard a carrier.  However, that was more of a laudatory post, offering a bit of praise to the program.  Today's post?  Not so much.

I was a little critical of the Navy's glacier-like embrace of UAS technology, especially considering my own support of the effort after my squadron flew a special surveillance aircraft over Iraq in 2003.

Two other OIF highlights stand out. A VS-29 aircraft was equipped with the Surveillance System Upgrade, or SSU, a one-of-a-kind, computerized, carrier-based intelligence gathering asset. The SSU had the capability to stream real-time video from a camera or from the aircraft's synthetic aperture radar to the ship or to a unique mobile ground station. With a range of more than 150 miles, SSU quickly became the primary choice for aerial surveillance in theater.
http://www.codeonemagazine.com/article.html?item_id=21

The Navy decided not to move the SSU towards an official program of record, stating that our aircraft would be replaced in 10 years by UAVs.  It was actually closer to five years as the Predator, Reaper, and Global Hawk programs really took off, literally and figuratively.  However, those were Army and Air Force Programs.  The Navy still hasn't picked up the Naval ISR mission in full-force, with the Boeing/Insitu Scan-Eagle only operated on a few Amphibs and Destroyers, and not permanently.  The Air Force was essentially forced to embrace UAVs due to the tremendous wartime appetite for ISR, but they now seem to be all-in, even making attempts to ensure UAS pilots have the same opportunities as as manned aircraft pilots.

Before I retired, I was smart enough to realize that UAVs were not going away anytime soon so I figured that if I couldn't beat 'em, I'd join 'em.  So I got myself involved in the Navy's small tactical unmanned aircraft system (STUAS) Tier II program to help get some UAV creds on my resume.  When I did retire, I applied for a Program Manager position with General Atomics Aeronautical System Inc. and made it through the fifth and final interview before the Navy called to offer me my current position.

I feel that the Navy was overly protective of the manned-aircraft concept, and slow to get the UCLASS program off the ground.  It still is in my opinion.  After all, there are great big fat carrier aircraft programs and rice bowls to protect.  While the technological challenges for UAS ops from a carrier are huge, the US Defense Industrial base is very good at doing huge, and the intro photo proves that.  So why the slow roll in continuing the program?  I think the Navy is just not fully committed to moving more towards unmanned cockpits.  I admit, it's a huge paradigm shift, but so was putting the emphasis on aircraft carriers instead of battleships.

Meanwhile, after determining that the X-74B design won't meet future requirements, the Navy can't decide whether it wants a low-risk design that is affordable and easy to produce, or one that pushes the technological envelope.  And as to the mission-set for it, we can't decide whether we want a high-end strike aircraft, or an ISR bird designed to operate in permissive airspace.

"One industry insider involved in the program said that the Navy had altered UCLASS specifications throughout the preliminary design review stage."

“We’re looking forward to [a request for proposals] in the hope that it’s going to finally clarify the requirements, clarify what kind of schedule the Navy is expecting, and we’re also looking for some clarity in the source selection criteria. ... Those are all question marks that have yet to be answered,” he said.
The Navy in March released a notice that a draft RFP was forthcoming, and industry officials predicted requirements would be in hand by the end of the month. In early April, Rear Adm. Mathias Winter, the service’s program executive officer for unmanned aviation and strike weapons, announced that it would be released later in the month but would not be publicly available.  (Not publicly available = classified)


Constantly shifting requirements (as well as under-whelming and underfunded mission packages) is how we got into trouble with the Littoral Combat Ship, problems with cost, schedule, and performance that embarrassed the Navy, made Congress highly critical of the program, incur great risk to the Navy's entire shipbuilding budget, and continue to fleece the U.S. taxpayer. The good news is that all those problems continue, with no easy solutions on the horizon.  Doesn't that just make you sooooo happy after you've all just paid your taxes?

The article mainly discusses using the UCLASS for ISR (with limited strike capability), but I just don't see ISR being the primary mission for it.  Since when has the Navy fully embraced the ISR mission?  They eliminated or gutted every ISR platform the Navy has fielded in the past 50 years.   The mission of the aircraft carrier is to fly overland and break stuff, to drop bombs if you will, not to cover the flight deck with ISR assets.  Satellites and USAF UAVs tend to do the bulk of the ISR mission for the Navy.  I think the mission confusion, or actually the downplaying of the strike capability of the UCLASS, is because of recent distaste with UAS strike warfare, and the media being hyper-focused on the belief that UASs cause too much collateral damage.  Manned aircraft are responsible for far more of that than UASs though.  It's a perception problem that the military needs to deal with if they want to move towards a UAS-based Naval strike capability.

To be fair, the Navy will continue to use the X-47B to test integrated carrier operations.

The Navy wants to see how it will operate with manned aircraft on the flight deck and in the airspace, how quickly it can clear the landing area with a plane coming in behind it, as well as other things like folding its wings and retracting its tail hook, Capt. Beau Duarte told reporters.

Coincidentally, LTjg Beau Duarte and I were flight school classmates oh-so-long ago.  Now he's the Program Manager for PMA-268, the Navy's Carrier Unmanned Aviation Program Office.  Seems like not all Navy leadership is hesitant to put the WSO and Big Time out of a job. 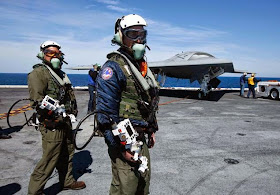 I'm glad the program is progressing, and it's likely in good hands under CAPT Duarte, but my crystal ball still sees the Navy mucking it up- and a program that is way over budget, behind schedule, and with an aircraft that isn't performing to a level commensurate with our invested tax dollars.  Time will tell though.  I'm hope I'm wrong.