Conformity and acceptance- What I learned at Comic-Con

To be in the Military, you have to be at least a little bit of a conformist.  It starts on your first day with some Drill Instructor or a Sergeant of some sort yelling commands for seemingly no reason at all. At first he's screaming at the lot of you, but then quickly switches to one poor sap for the smallest or the largest of infractions, whichever guy stands out. You don't want to be the guy that is too slow, too fast, too tall, too short, too anything.  It doesn't matter though, even if you're perfect.  They aren't unfairly singling any one person out as eventually everyone will screw up and get their face time with the guys in charge.  It tapers off as you learn to conform, work as a team, and forget your individuality. 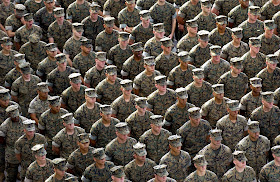 The uniform cements that notion.  You're all the same, nobody looks different from anyone else, and you all work toward the same goal.  At first it's just finishing the basic phase, then it's whatever training you're undergoing.  Later it's helping to get the squadron underway, or even taking it to war.  You can't do that unless you fit in, work together, and ignore your individualism, for the most part at least.

I've basically been a conformist my whole life.  In high school there were two main groups, the dopers and the jocks, so it was either smoke marijuana or play sports.  Not a hard guess as to which way I went.  In college it was joining the young Republicans, wearing khaki slacks or shorts with a polo shirt and penny loafers.  That wasn't so much a GOP-prescribed dress code, but it was more like what a lot of folks wore in the 80's.  On liberty in the Navy?  Khaki slacks or shorts, a polo shirt, penny loafers, and then with a huge expansion of my wardrobe, maybe even a button-down oxford or short-sleeved collared shirt!  Now that I'm retired, I've found that the Hawaiian shirt is much more forgiving to the pony keg I'm hiding under there, (no abdominal six-pack for me), along with the now-requisite khaki shorts or slacks.  So I pretty much stuck to the conformist attitude while I was in the Navy and still do today.  I still like to keep my hair short, what's left of it that is.  I tried letting it grow a little longer, going 6-8 weeks before visiting the barber, but I hated the scruffy feeling on my neck and ears, and realized that I just can't do civilian.  So when I was in the Navy, I learned to fit in, either because it was what was expected of me, or I liked the comfort of conformity.  I was pretty much a "TOD." Scroll to the very bottom here for the definition.  Things haven't changed...much.


It's pretty hard to change your attitude when you've been a conformist for 30-40 years.  Hard, but not impossible.

I've briefly mentioned my kids on this forum via a couple of posts. "Four Different Aircraft" introduced my son, and I referred to the whole family in a comment on one of Sarge's posts before I joined the team. My beautiful wife and I are blessed with a 15 year old "wicked-smaht" and highly artistic daughter whom I call the "Teenangster." Our first born is our 18 year old son, the Minnow- a moniker given to him by the nurses in the NICU  who read my flight suit name-tag listing my callsign (Tuna), in both English and Japanese.  He was born in May, but wasn't supposed to hatch until August.  Possibly because of him being born premature (2lbs 5oz), he's always been a special kid.  Autism is the diagnosis, some would call him an Aspie, but he's pretty high-functioning.  However, he's still a kid at heart and will most likely remain so. 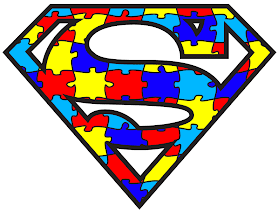 The Minnow is not your average kid.  He sometimes says things that are not necessarily mainstream, he laughs a little too loud at times, he'll get up and pace the floor in public places talking to no one in particular, gesturing wildly sometimes.  As I'm sure any parent would, I worry about him because he's a little different, that people might pick on him, or make fun of him, or at the worst- take advantage of his trusting nature.  In some ways, he's pretty normal for a teenager. He likes his X-Box, Superhero movies, his I-Pod, and girls, and not necessarily in that order.  For Halloween a few years ago he went as "Master Chief" from the X-Box Halo video game.  He likes the costume so much that when we went to Universal Studios, he wanted to wear it.  The conformist in me instantly went into high gear and tried to talk him out of it.  "You'll be too hot" I said as a lame alternative to how I really felt.  He was unconvinced and wore it anyway.  Turns out I was concerned for no reason.  He was a big hit and lots of people cheered him and asked to have their picture taken with him.

He continued to wear the costume to the movie theater for nearly every action-adventure movie we saw, as well as on a trip to Disneyland.  He was an even bigger hit there.  In line for one ride, a bunch of college kids started chanting MAS-TER-CHIEF, MAS-TER-CHIEF which put the biggest smile on his face.  On another ride, the operator gave him a bunch of head-of-the-line passes.  He was also approached by a game-designer for Microsoft who said that any kid wearing a Master Chief costume to Disneyland deserves some free X-Box schwag, which he mailed to us a week later.

So when the Minnow asked me to take him to Comic-Con here in San Diego, I couldn't deny him the one opportunity where he would fit in more than anyplace in the world. 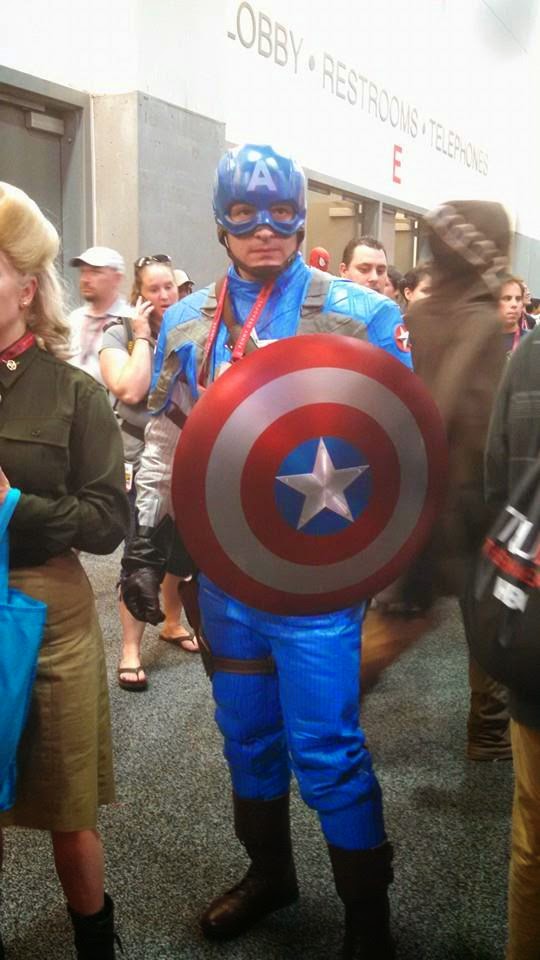 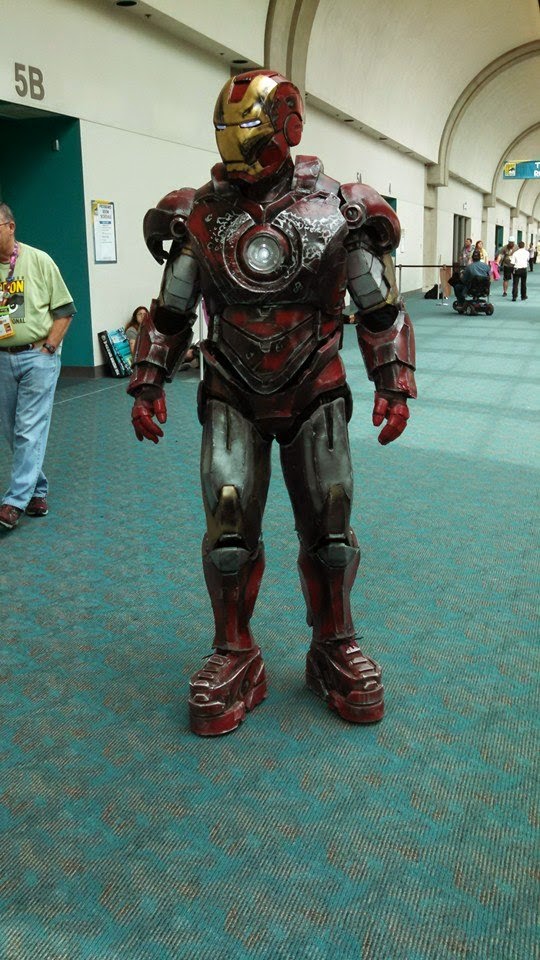 "Geek-Fest", "Freak Zone", "Nerd Prom", "The largest group of virgins in one place", are all ways people have described Comic Con.  Those may be true to some extent, but the convention-goers embrace every supposedly unflattering slight thrown at them, my kids included.  Unfortunately, it took us four years to join them.  Getting tickets is HARD!  130 Thousand people attend Comic Con and the demand is closer to a million.  You don't wait in line to buy tickets, you register for a random lottery draw online and hope you get picked.  This year, I had 3 different computers logged in to the accounts of myself, my son, and my daughter. His number came up and I quickly purchased the tickets.  I tried to buy a fourth, but they were sold out seconds later.

The place is a mad house.  It's ordered chaos like the top of an aircraft carrier during flight ops, but chaos nonetheless.

The kids and I had a great time, and they were both in their element.  To be perfectly honest, I was too.  I was a huge collector of comic books when I was young.  DC comics were my interest, but I had quite a few Marvel issues. I still have every comic I ever bought, and they're all meticulously cared for in plastic sleeves, awaiting the day when I feel the need or desire to part with them.  My collection might be worth about a grand, so it's not like I'm going to get rich selling them.  For now, having that reminder of my youth, knowing they are safely stored for another day is enough to make me happy.

Why do I tell you this?  It was during the convention, as I was happily looking through the comics for sale to see how much my own collection might be worth, that I shed whatever was left of my reservations and fears for my son, and my own inhibitions. Not just at Comic Con, but for life in general.  He was very happy there, as was probably everyone else, dressed up in costume or not.  I realized that Comic Con is a tremendous example of absolute acceptance.  Geeks, nerds, hotties dressed up in tiny pieces of foam rubber and cloth, even conservative bald men who could stand to lose a few pounds- all are welcome and completely accepted there. 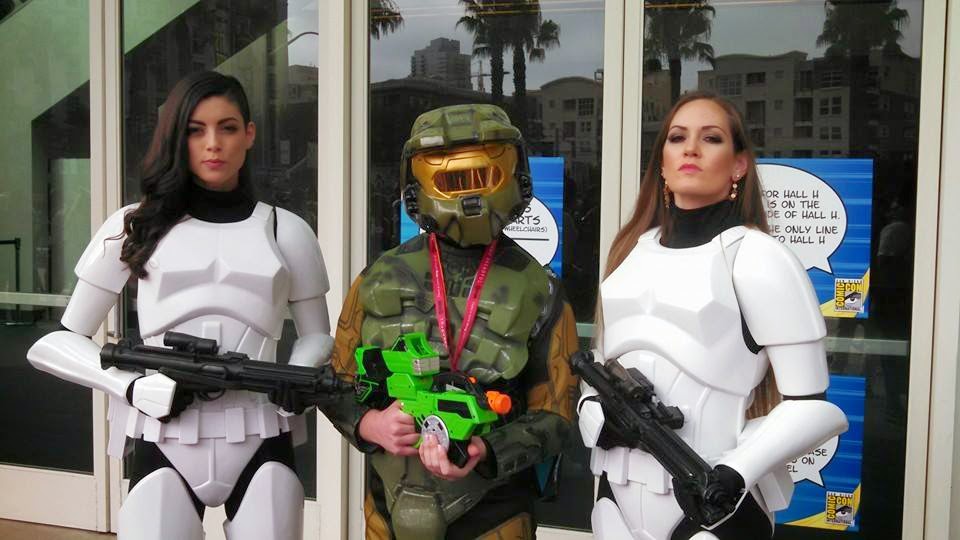 It took my adult son dressed up yet again in a fairly thread-bare Master Chief Costume to make me realize that my own conformity is driven not only by my own tastes and interests, but by how I think others will perceive me. In almost every instance, save for the occasional job interview, what others think about you should be irrelevant.  Sure, I need to ensure my son has sufficient self-protective skills so he isn't taken advantage of, but he couldn't care for a second about what others think of him.

We should all be so lucky. 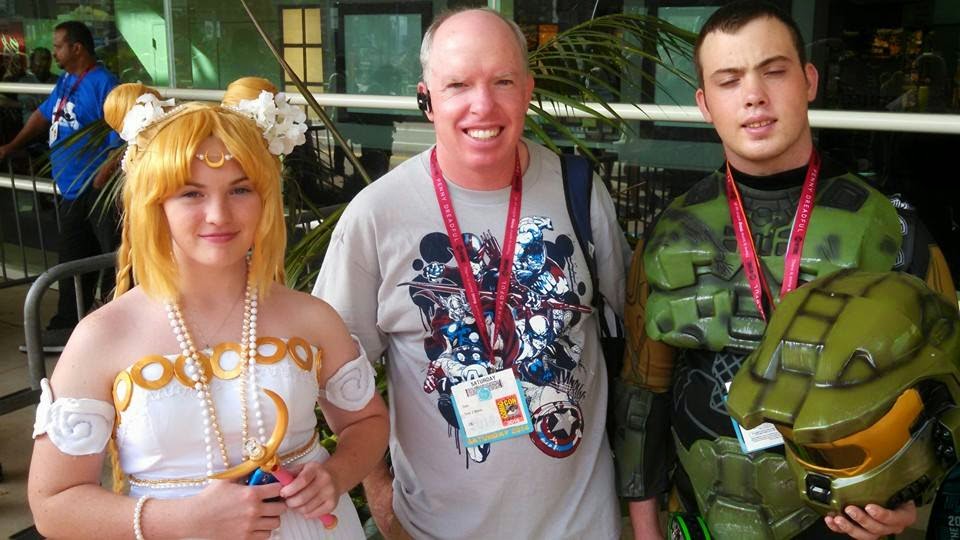 Hope to see you next year at Comic Con. Maybe I'll even be in costume.