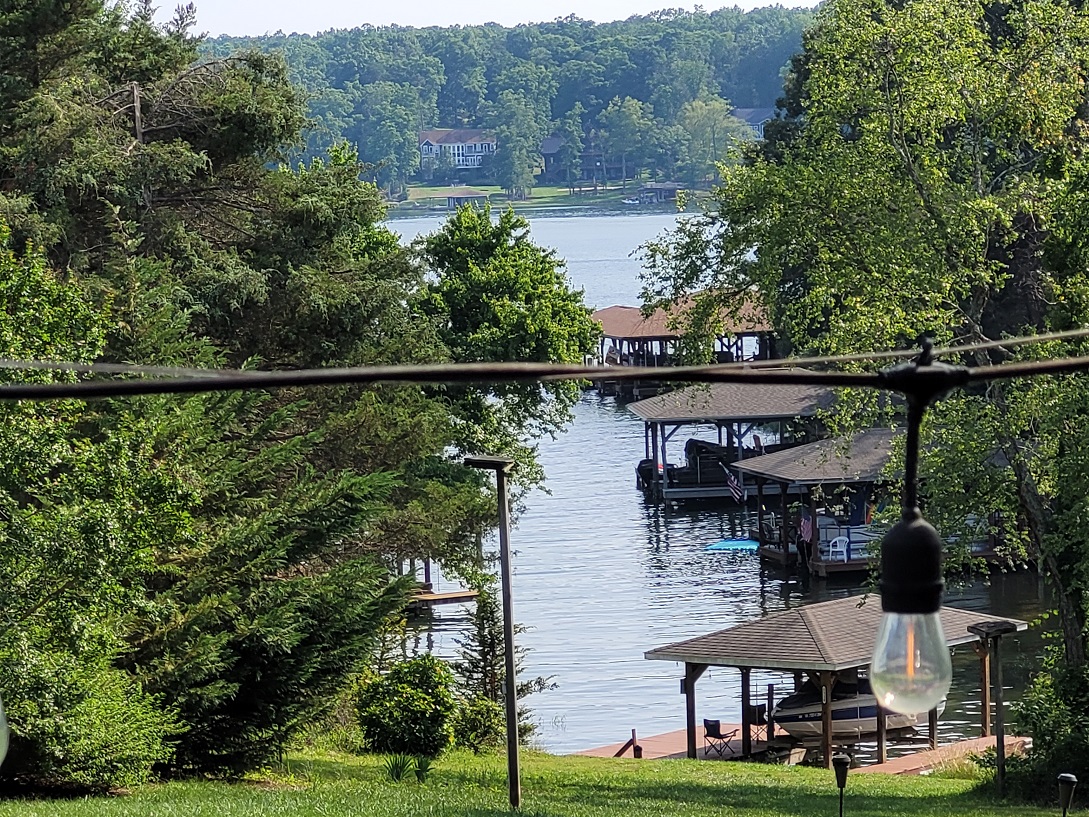 So yeah, that was my morning, afternoon, evening view (well, the light was different each time, but you know what I mean ...) for most of last week.
BTW, today is the first time I noticed the giant light bulb in the foreground. Sorry, I was focused on the water ...
Anyhoo, I had a great time with The Missus Herself, two daughters, one son-in-law, three granddaughters and one grandson. The latter and one of the former shown below. I tell ya, the lad is going to be a proper rocker someday. (Or maybe a fighter pilot like his Dad, Lord knows he's smart enough to be a Nuke like his Mom. Smarter 'n me he is. Though that bar is set rather low indeed.) 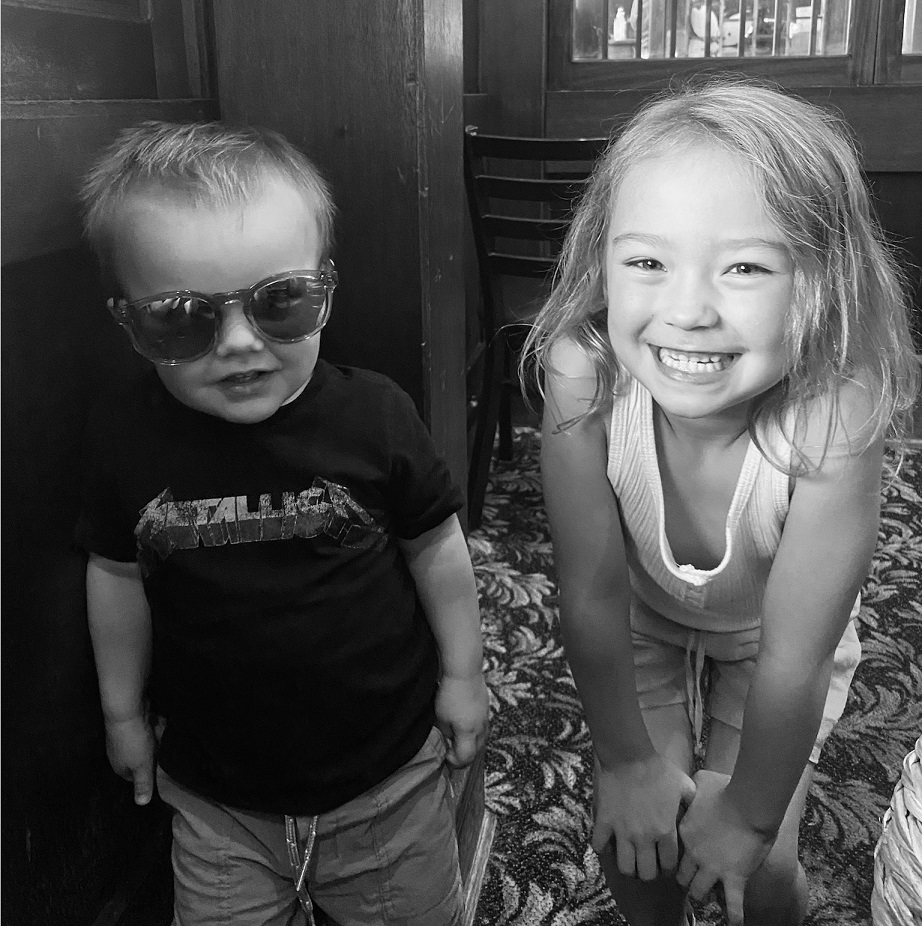 I know, I know, I haven't put up a proper post in a couple of weeks. Truth be told, this is the longest stretch I've gone without posting in quite some time.
At first I was kind of worried, I was jonesing to write something, anything. That feeling passed after the first day when I awakened to find this. On the drive down to Maryland (My Maryland), I was a bit concerned as to the possible breaking of the streak, i.e., the consecutive days where we have posted something (damned near anything).
About the time we hit the Delaware state line, I stopped stressing about it. There have even been days when I've contemplated throwing in the towel on this blogging thing, heaven forfend, yes, 'tis true. As juvat has mentioned, it ain't easy doing this every day. Though he did it well, I fear I have overstressed his airframe. Yup, carrying the load for much of the last ten days may have over-G'ed juvat. (As an aside, no juvat, you can't have next Monday off. Scrooge I've been, Scrooge I remain.) Oh yeah, Tuna pitched a couple of innings as well, he's a great relief blogger.
Anyhoo, the lads did well, I'm proud of them. Also feeling rather rested, writing-wise, so here we are.
In the next photo, no, I'm not teaching my grandson to blog, we're looking at pictures of puppies, in preparation for watching the official video for AC/DC's Thunderstruck. Yes, he's a big fan, the Metallica shirt above notwithstanding. Forgot to mention, that's L'il Sweetie on the right in the photo above, LUSH's youngest. Which reminds me, the youngest grandson doesn't have a callsign yet.
Hhmm ...
I'm on dangerous ground here, The Nuke, while she does have a sense of humor, is literally a mother bear when it comes to protecting her progeny.
Good Mom there. 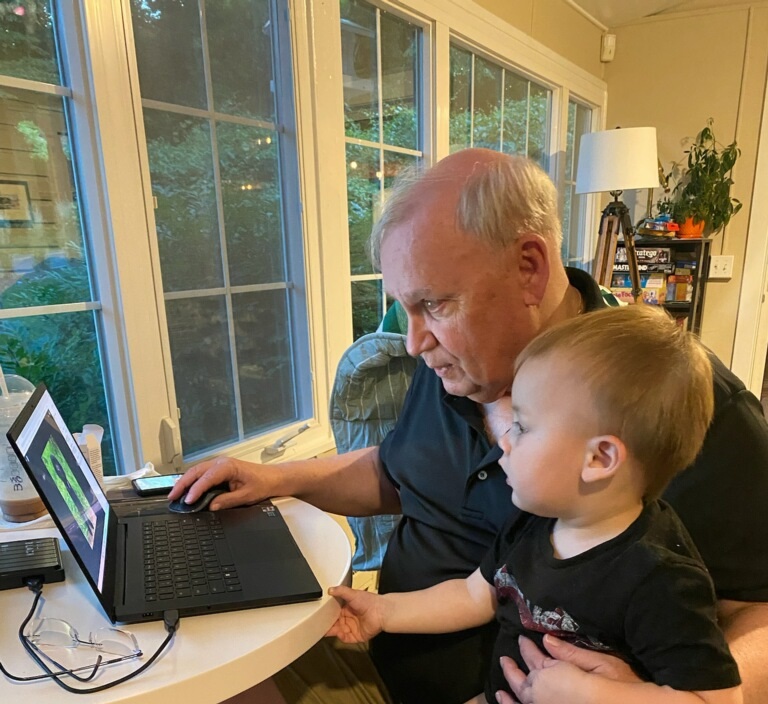 Looking at the photo above, all I can say is, damn, I'm getting old.
The trip to Maryland was not too bad, Waze routed us over the Tappen Zee, rather than endure the sometimes agony of the Cross Bronx Expressway. Spent a bit of time on the Merritt Parkway in Connecticut, a road which the only benefit to is no trucks. Other than that, I tend to avoid it, traffic along I-95 in western Connecticut, though it is a colossal pain most of the time, is, at least, a known colossal pain. The Merritt Parkway seems clogged these days with people looking for a driving school, as most of them need it. 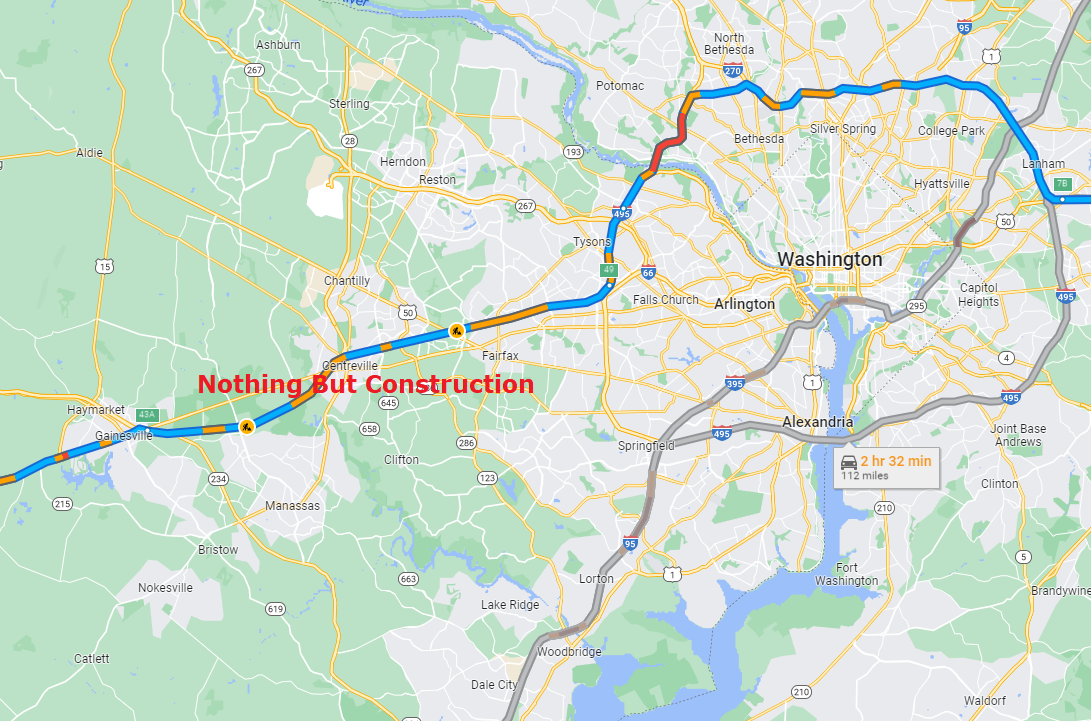 All that being said, Monday the 13th of June was the very first time I have actually operated a motor vehicle closer to DC than Annapolis. No fun, no fun at all. Note the map above, once past the "DC area" (whatever that means) I-66 was "OMG, will this effing construction ever fricking end?" NBC, all the way.
I was flying number two on the trip down to Lake Anna, Tuttle and The Nuke have been there the past cuppla summers, so he was flying lead. He led, I followed. No, I didn't close my eyes, though I was tempted at times.
On the way back I noticed this -
Saw the signs for the "Manassas Battlefield," of which the above is an example of what I noticed. Old fences, "period" fences if you will. "Cool," I thought.
I mentioned to Lush that her great-great grandfather had been captured at one of the two battles fought in that area. (I never remember which one.) At which point L'il Bit, the senior granddaughter, after a moment of intense calculation, said, "Geez Grampa, you're old."
Yup, my grandfather's father fought in the Civil War (or whatever your particular dogma insists that it be called). So yes, I am old.
All that being said, why Manassas? Why not Bull Run? (Which is what the north called the battles, First Bull Run and Second Bull Run.) The south calls it First Manassas and Second Manassas. As they won both encounters, seems right that they get to name it.
The North seemed to like naming armies and battles after rivers and creeks - the Army of the Potomac, the Army of the James, First Bull Run, Antietam, etc. Whereas the South liked to name armies and battles after places - the Army of Northern Virginia, Army of Mississippi (state, not river), First Manassas, Sharpsburg, etc. Just thought I'd mention that.
Anyhoo, drove through the battle area, didn't stop, not with an almost two year old starting to tire of riding in a car seat. Speed was of the essence.
Anyhoo, I'm back, vacation was good, travel is taxing, can't wait to do the former on a near permanent basis come December.
Really looking forward to that.
And I think Beans is up tomorrow. My return is semi-short-lived, but I am back and will pick up the WWII series soon, I promise. (Sorry to those who don't care for it, but it's my thing, history ya know.)
OldAFSarge at 2:00 AM
Share