The Stuff That Falls Out

No, this is not a flashback/rerun of a post, but if it sounds familiar, you're right- I've used that title before.  That name works for random musings I come up that fill up my brain when I try to help out here at the Chant.  So here you go with some semi-eclectic thoughts I've had recently. 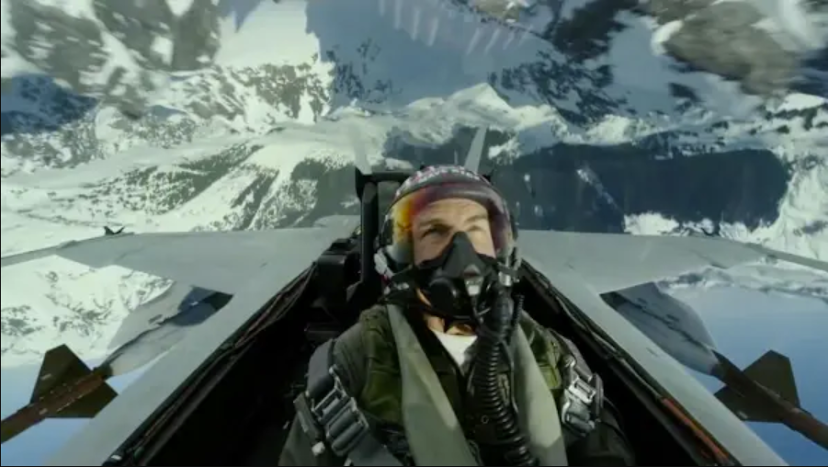 Source
I'll start of with Top Gun Maverick.  Mild spoilers ahead, so skip past the next 3 photos if you need.  Several folks have provided their reviews either here or on social media, and mine are essentially the same.  It's a great movie, partially because it didn't try to force any social justice or wokeness down our throats, just focusing on pure entertainment.  It was just a fun and exciting flick, that didn't try to be more than it is- no lessons for us, or trying to guilt us about the climate or our foreign policy, and didn't feel the need to force feed us positive images of specific demographics or life choices.  Sure, it was unrealistic with regards to training rules and some challenges with physics, and by that I mean them pulling so many G's as they're climbing out of that canyon, but it was really well done, and I am glad Tom Cruise is getting all the tickets sales that he is. It's apparently his highest grossing movie ever.  It also has a few laughs, but my only critique would be that there weren't enough memorable lines that we will quote for the next 3 decades.  One that made me chuckle though was Maverick saying "There will be GPS jamming, so the F-35s are out."  By the way, when they released the first trailer couple years back which showed a Tomcat flying over the snowy mountains, I guessed that he would be shot down and would have to steal a Tomcat.  It was fun to see that I was right.  I was planning on seeing it again this past weekend but I wanted to go to an IMAX screening.  Unfortunately, in its third weekend it has been relegated to the smaller screens now it seems. I tried to go IMAX the first weekend it was released but all the IMAX tickets were sold out for the times I was able to go.  It's playing on base next weekend so maybe I'll go then.  No IMAX, but good company. 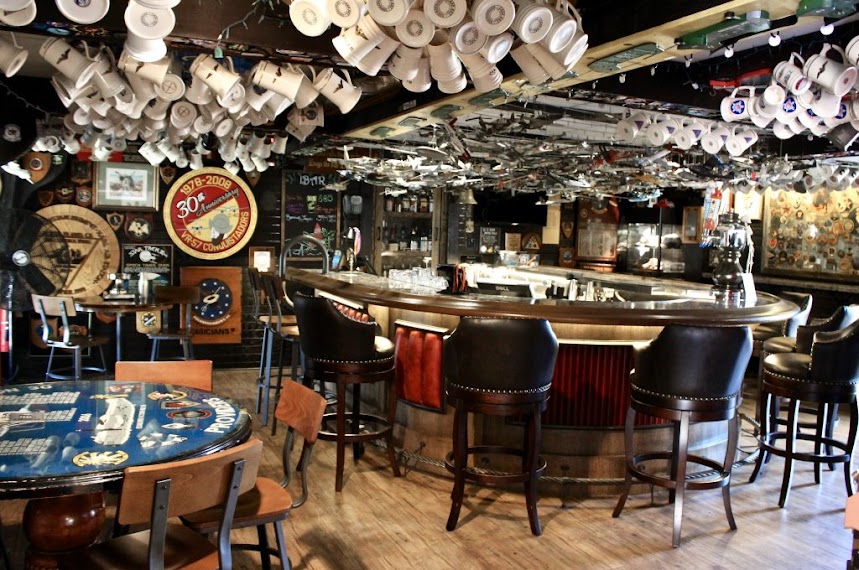 I-Bar on NASNI  Source
By the way, the bar featured in the movie, is not the actual World Famous I-Bar that inspired it.  They built a set on the beach on North Island and used many of the same plaques and mugs that are over in the I-Bar, but the production crew tore it down a few weeks after filming.  A friend of mine who lives next door to the real thing was able to get inside the set, which he said was amazing, wishing the I-Bar could have been moved in.  Anyhoo- it used to be the hangout for S-3 Viking guys, (and its courtyard was the site of my retirement), but has now been relegated to rotor heads.  Unfortunately a lot of our S-3 stuff went missing over the years.  Damn rotor-heads. 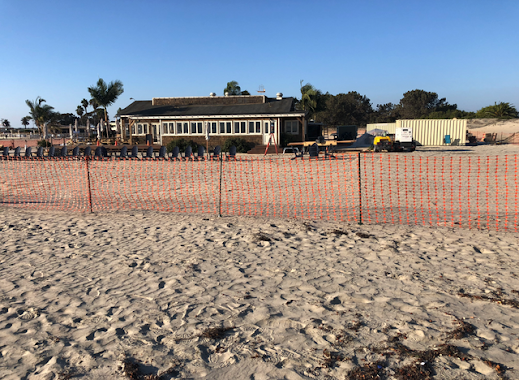 Has anybody seen 2000 mules? I've watched and read several reviews of it, but haven't plunked down the money.  Although it will just confirm what I already believe, that there really was fraud during the last election.  Or are we supposed to still believe the narrative that 2016 was stolen, and 2020 was completely on the up and up?  Whatever truths that documentary revealed, they'll never make it into the public record though as it would wreck our institution of pseudo-stability here in the US.  Was there enough fraud to change the outcome?  According to Dinesh D'Souza there is, but that's an ugly truth that will remain suppressed I expect, too many prominent people would be outed as officially corrupt and well deserving of jail.
Speaking of elections, it's my prediction that the Democrats will put Pete Buttigieg up as their candidate in 2024, assuming Biden can't.  Harris' campaign would be DOA.  I think they know there is no chance they can win, so they will put up a sacrificial lamb that checks some identity politic blocks.  They also know his loss will be more acceptable than a loss by any future/better candidates.  Lambs to the slaughter comes to mind.

Anybody know the going rate for bird seed? I recommend you invest in it based on how much my wife has been buying recently.  We have four bird seed containers on our back fence which seemed to have to be filled nearly twice a week. It's not the birds that seem to eat the most, although there are quite a few of them that visit regularly, but we have a mama squirrel and two babies that have learned where the feeding trough is and they are voracious. They have learned to use their paws to dig through the bird seed to find the better seeds like sunflower seeds, spilling a ton into the canyon and on to our side of the fence. Our corgi did not eat one night and I discovered why, as her waste was almost entirely bird seed.  She hasn't done that since, so I think she learned her lesson. 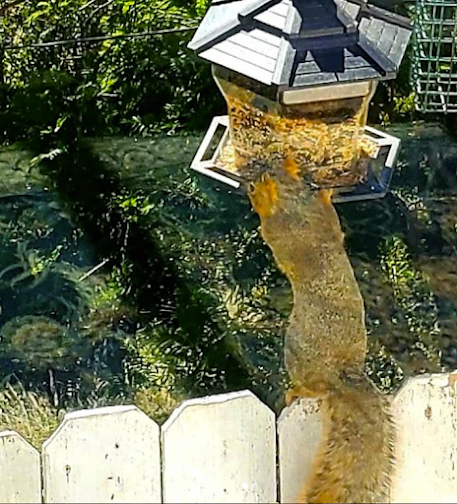 Speaking of pets and going rates, is $90 about average for dog grooming and nail clipping? Freaking expensive if you ask me.  I don't spend that in a year on my haircuts, although I do my own nails.  I guess there was some de-shedding done as well, or some other procedure that gets rid of all the loose undercoat.  If that keeps us from having gigantic dust bunnies for a month or so, maybe it's worth it.  In case you didn't know, Corgis shed like no other, and we have two of them.  I joke that we get another Corgi every week.  We have lint rollers in all of our cars and I have one at my desk as well.  We can't escape it.

Is anyone else tired of the constant talk of the trans issue?  I don't know why the left has been co-opted by a small select group of folks that refuse to accept what truthful physicians say about it.  There's a very common-sense cartoon I found that compares how we treat anorexia and schizophrenia, yet accepts what is another mental disorder.  It's really sad that this issue, and nearly every social issue the left has taken on, seems to be rooted in a lack of factual evidence, and based solely on feelings and emotion.  Any discussion to the contrary is labeled as racist, intolerant, or filled with ad-homonyms.  It reminds me of the quote by Carl Sandburg:

The left is quite adept at their only game- yelling like hell.

It's not only the social issues, but clearly that ignorance with regards to their economic, energy, and immigration policies is what were having to deal with now- rising crime, runaway inflation, gas prices through the roof, and constant caravans of illegals coming to the border.  I just hope things aren't beyond saving by the time the next congress or administration can get to work.  Yeah, I'm pessimistic as heck, but I don't see a lot of silver in those linings.
Maybe I just need to have the positive outlook of our Veep.

These gas prices here in the "Golden" State have tamed me.  I haven't driven my Mustang over 75mph in over a week, relaxing in the slower lanes more often, and using cruise control when able.  I paid over $6 a gallon for regular last weekend!  Painful prices for sure, and it's just going to make everything else even more painful as fossils run our country.  I have no problem with EVs, but am not so naïve to think I'd be more environmentally friendly by doing so.  The lack of understanding of economics by our Administration with their energy policies, and the naiveite by the libs who push for an end to fossil fuels astounds me.  The seemingly endless rise of prices are clearly hurting a lot of folks, and something's gotta give.  While it's discretionary spending right now, voting left is definitely gonna give way this fall.
While these gas prices are concerning, what I'm really worried about is Sarge reducing my pay here at the Chant!
Ok, enough spillage for today.  Sarge should be back in his regularly scheduled timeslot tomorrow. 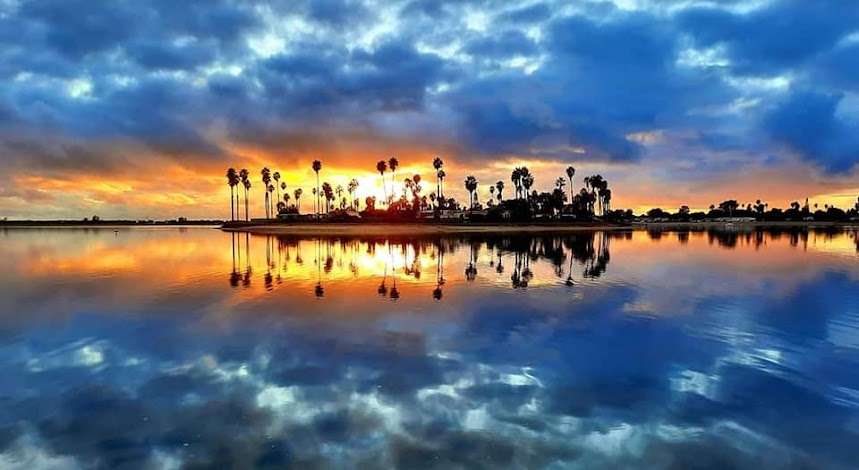 Barry Alman Photo via FB
Tuna at 1:30 AM
Share